Great things are happening at Namwianga Mission Hospital. Here are just two of them.

Each day begins with a chapel service for patients and staff.

Hospital Administrator Shepherd Mbumwae explains the daily gathering: "Our priority every morning before we start screening patients is to have chapel with patients and staff together to be fed the word of God and find encouragement. We sing songs of praise and then we have sharing from the holy scriptures."

Derrick Mwiindilila serves as a counselor at Namwianga Mission Hospital. “Chapel gives patients a lot of hope in being healed and walking with Jesus during their times of illnesses,” Derrick says. “Staff members also say that the devotions in the morning give them strength to go through the day.”

The Under 5 Clinic serves the needs of mothers and children.

Young mothers like Alent Siandwa (left) are thrilled with the services provided by Namwianga’s Under 5 Clinic. She delivered her daughter Pristedor at the hospital and brings her back regularly for well checks and vaccinations. Alient also enjoys the advice she is given by the caring nurses during their visits. “I’m filled with joy that my daughter is doing well,” adds Alient.


Since 2017 Namwianga Mission has been replacing worn and dilapidated roofs as part of its Raise the Roof initiative. The latest renovation is at George Benson Christian College where the L-shaped building that houses the library, computer lab, offices and two large classrooms is getting a new red metal roof to match the rest of the campus.

Ceilings will be replaced in most of the building, but the two classrooms will get ceilings for the first time — an addition that will improve learning conditions a great deal, said College Principal Kadonci Kaziya. “It was so difficult to lecture in the rainy season with leaky roofs and no ceilings. I am sure that these improvements will make the environment more conducive for learning and benefit the students,” he said.

One section of the Namwianga Christian Secondary School quadrangle and several dorms still need new roofs. If you would like to help, please donate today.


Cases of COVID-19 in Zambia are climbing steadily. Most of the outbreaks are concentrated in the capital city of Lusaka and areas in the northern part of the country. Kalomo District where Namwianga is located has been spared so far. No one associated with Namwianga has contracted the disease, and Namwianga leaders are doing everything possible to avoid any cases. Hand washing stations are set up outside each office and building. Mission staff members are prohibited from traveling to large cities. Masks are available, and social distancing is encouraged.

Namwianga Mission Hospital set up an outdoor triage area to screen all incoming patients. Hospital staff members have been trained extensively in COVID-19 response protocols. Dr. Stephen Chanda and a team from the hospital are disseminating information throughout the schools, college and community through meetings and media. Namwianga Christian Radio offers regular updates and informational programs about COVID-19 and prevention.

One of the Namwianga community’s first responses to the coronavirus threat was fervent prayer, reported Education Secretary John Simuuba. “Before the government required churches to stop meeting, churches gathered to pray for protection from COVID-19. Now the prayers continue as families and small groups meet privately in homes for worship and Bible study,” he said. Namwianga Christian Radio broadcasts sermons on Sunday, and listeners have responded with enthusiasm.


The Ministry of Education in Zambia closed all schools and colleges on March 20, three weeks ahead of a scheduled four-week break between terms. Secondary school and college students at Namwianga Mission were provided assignments and resources to complete their Term 1 coursework at home.

Administrators and teachers at the secondary school and college immediately began making contingency plans for students to continue their educations. Zambian schools are not expected to reopen for all students in the near future, but the government has directed that some grades and some college years should begin on-site learning. Grades 9 and 12 returned to campus for Term 2 on June 1. Namwianga Secondary followed government guidelines in preparing for the opening to ensure the health and safety of all students. The college plans to open for students in their graduating year later in June and is making all appropriate preparations.

The secondary school and college are moving forward to continue educating the other grade levels and other college students by distance learning. Classes will be available in online formats. Coursework is printed out for students who live in remote rural areas without Internet access. The Mission has established set locations where students can pick up and drop off their coursework.

Some secondary students in remote areas have had a special kind of lesson delivery. Rajiv Siamweela, Assistant Sponsorship Coordinator at Namwianga Mission, used a motorbike to deliver Term 2 coursework, textbooks and World Bible School lessons to sponsored secondary students who live in remote rural areas without internet access. He met individually with each student to explain the requirements and to arrange for picking up the completed lessons. 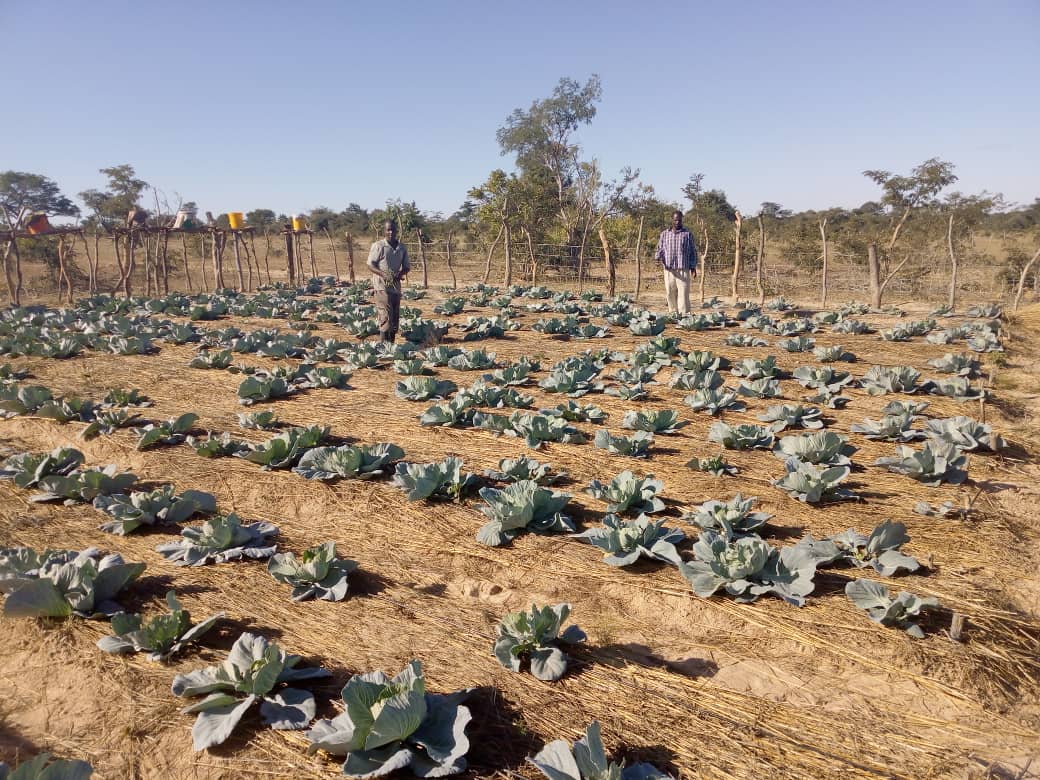 As part of Zambia Mission Fund’s food relief efforts, a community garden was constructed at Zyangale Church of Christ in Zyangale village. Sixty raised beds are now ready to provide fresh vegetables to the entire community. Namwianga Mission Farm Manager Thomas Simubali led the Survival Garden Workshop at the village February 17-22, training and supervising representatives from 55 households. The participants learned how to construct raised beds and how to use manure “tea” as a top dressing organic fertilizer. They also learned the importance of crop rotation to maximize soil fertility and organic methods to reduce pests and disease.

The workshop involved participants in “learning by doing,” so everyone pitched in to prepare the garden. A bucket drip irrigation system is now installed so that even in times of limited rainfall the garden can thrive on water provided by a nearby borehole (well).

A second workshop at nearby Zyangale Christian Basic School trained the school’s pupils and teachers as they constructed a garden that will be used to feed students, teachers, and their families. 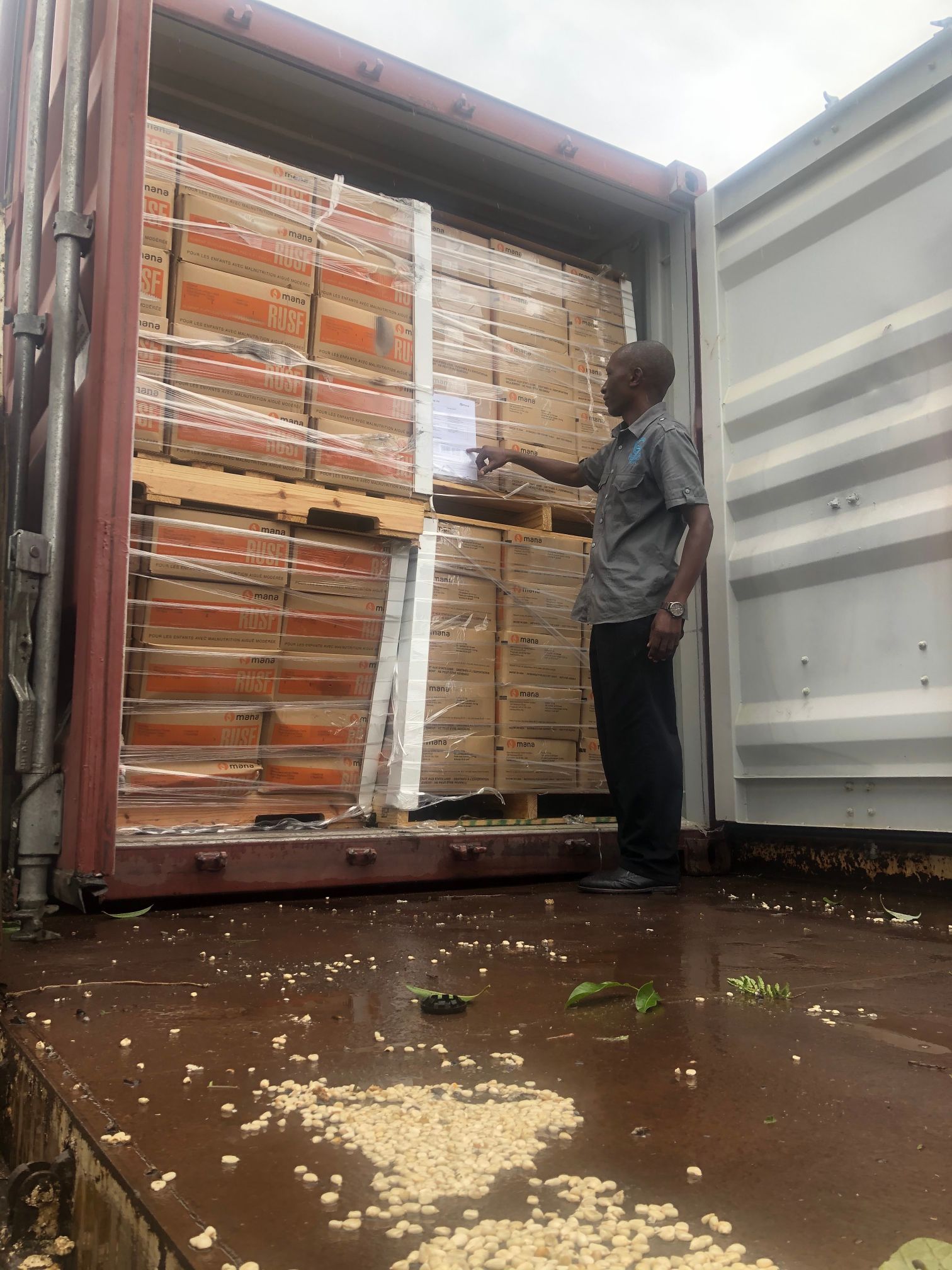 Distribution of the 135,000 packets/meals will begin soon under the direction of Namwianga’s Food Relief Coordinator Wilson Siazilo. “We are so thankful the MANA container arrived,” said Ellie Hamby, Zambia Mission Fund board member. “It came at a good time because there are areas all around Namwianga that did not receive enough rain this season. There is going to be hunger for many more months."

MANA learned about the need in Zambia through student and faculty fundraising efforts at Harding Universitya. MANA offered to give supplements equal to twice the dollar amount of donations given, and they then provided free shipping.

Thank you, MANA, for helping to feed the hungry in Zambia! Find out more about MANA at mananutrition.org. Hunger is Real in Zambia

Zambia Mission Fund Board member Ellie Hamby is at Namwianga this week with the Harding University Physical Therapy group. She and the Harding students are witnessing the hunger crisis firsthand. Here is her report.

Hunger is real in Zambia. One day last week there were over 120 villagers who came to the Mission for food, and they were all hungry. They gather in the open area behind my house. More are coming every day.

The Harding University Physical Therapy group is here treating patients, but they saw the tremendous need of the people, so they took up a collection of over $2000. They were able to purchase 100 bags of mealie meal (ground corn.) They have been giving it out to the people, and the suffering they see is sometimes tough to take.

Please look at the pictures of people who came. You see, hunger does have a face, a name, and a story. Some of their stories are heartbreaking. Please pray for them and their families because when this mealie meal runs out, they will have no food.

Three to four days a week we continue loading the big truck with mealie meal and going to remote areas for distribution to the starving. We cannot feed everyone, but we can feed one person at a time. A Report from Drought-stricken Southern Zambia:

“The truth is that Zambia is starving.”

YOU CAN HELP! DONATE TODAY TO FUND FOOD RELIEF EFFORTS.

Last weekend four of us went to Nyanga for the gospel meeting. We knew this is one place known for severe hunger. I was broken within myself to meet people living in such harsh conditions yet still holding on to Christ. Amen! Thirty-nine congregations assembled at Nyanga. About 1,100 people were in attendance.


During our time there, we visited with a number of people who spoke one thing: that they were starving to death. Their gardens were all dried up due to lack of water. I took several pictures of dead streams. No sign of water anywhere. We saw few cattle around. This is a bad sign because cattle are one source of income. Some women brought chicken for sale. Those chickens were paper-weight I mean just few bones bound together with threads of muscles.


Most of the streams that normally around September would still have pools of water are so dried that you cannot think they ever had water in them. In spite of failure by our government to declare Zambia as hunger-stricken country for the world to come to our aid, the truth is that Zambia is starving.


God is good and gracious. In the middle of such tribulations 41 people heard the word and were pierced in their hearts and accepted Christ as their personal savior through baptism. Seventy-five were restored back into the Kingdom of our Lord Jesus. Great work is really going on there.


On our way back to Kalomo, we found people selling wild fruits. We stopped by to buy some of those fruits, not that we cherish them but that we help out a little. I wish my voice would be heard to the world to help out the situation because what I saw is just in a matter of time, lives will be lost to starvation.